DEAF AND HARD OF HEARING IN UKRAINE NEED YOUR SUPPORT 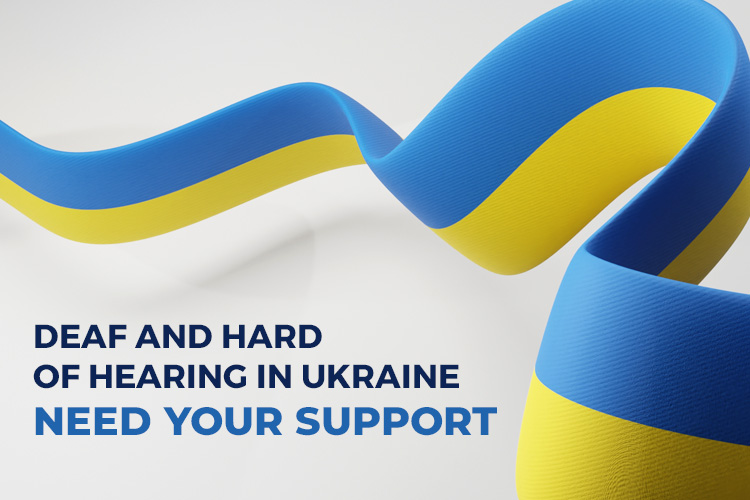 PUBLIC MOVEMENT “SOCIAL UNITY” is a non-governmental organization of people with disabilities. For more than 6 years we have taken care of the problems of people with disabilities, in particular, Deaf and Hard of Hearing people. Thanks to our efforts in close cooperation with public authorities and local governments, the need to meet the needs of the Deaf and Hard of Hearing (D/HH) people has been recognized at the state level. Gradually, public space objects began adapting to the needs of the Deaf. Our experience was taken as a basis during the development of the National Strategy for the creation of barrier-free space in Ukraine. The positive experience of the Organization in creating conditions for ensuring the rights of people with disabilities by partnering with the city authorities of Kharkiv is recognized at the UN level and recommended for worldwide use.

Also, over the past two years, the Organization has been working hard in order to adapt the content of web resources to a format accessible to the Deaf and Hard of Hearing citizens.

In March 2021, a joint project of the Ministry of Social Policy and the PUBLIC MOVEMENT "SOCIAL UNITY"’s own presentation, "Hear Me", was presented. The implementation of this project has made it easier for Deaf and Hard of Hearing citizens to communicate with public authorities. As part of the project, Deaf people can use the services of a sign language interpreter during remote access through the hotline 1539.

The “Еar” badge icon has also appeared on the websites of the Ministry of Foreign Affairs of Ukraine, the Ministry of Health, the Ministry of Environmental Protection and Natural in Resources, and the Fund for Social Protection of Persons with Disabilities. This has made the web resources of these government agencies accessible to the Deaf and Hard of Hearing Ukrainian citizens.

In June 2021, Kyiv hosted a presentation of the National Social Portal "VILNO" (VILNO means free) and its first part "Work VILNO!", Initiated and created by the PUBLIC MOVEMENT "SOCIAL UNITY" with the support of the Ministry of Social Policy and the Council of Europe Office in Ukraine.

Over the years of our work, we have united around us a highly professional team with an active public position, which prioritizes public interests of their own. Sign language interpreters, cameramen, technicians, and activists work closely together to create a barrier-free space for people with disabilities.

Russia's military aggression against Ukraine has been a difficult situation for each of Ukraine D/HH citizens. However, D/HH people are especially vulnerable in this situation. Even before the aggression began, in our previous peaceful life, D/HH citizens were in an information vacuum due to the peculiarities of the perception of information and the low degree of adaptation of public space to their needs. Even though that in Ukraine are exploding Russian’s bombs now, D/HH civilians can mostly feel danger only by their heart. The constant danger to the lives of civilians, the threat of air and missile attacks on civilian objects, fear combined with the lack of information - all this further deepens their sense of panic and doom.

As a non-governmental organization that has been working with people with disabilities for more than six years, we realize that about 1.5 million Deaf and Hard of Hearing (D/HH) people have difficulty accessing information that is currently vital for survival in Ukraine. We are aware that at least 400,000 D/HH people in Ukraine cannot hear the siren warning of the threat of missile and air attacks. We recognize that people with partial or complete vision loss also need to be provided with access to important information.

That is why the brave team of the PUBLIC MOVEMENT “SOCIAL UNITY” which is currently in the most dangerous parts of our country, despite all external and internal circumstances, such as life-threatening from results of shelling the Russian army's locations, the need to stay long in hiding, the lack of electricity in some places, and finally their own fear, decided to stay and support people with disabilities at all costs.

Our team, in addition to supporting round-the-clock service for the D/HH with the "Translator JM” mobile application, during the Russian military aggression brings to the attention of the D/HH people the necessary important information (for example, instructions and algorithms for actions during the Russian military aggression, instructions on how to help the Ukrainian army etc.), translated into sign language briefings of officials, recommendations of the Ministry of Health. All videos are accompanied by audio recordings for people with partial hearing loss who do not speak sign language, as well as for people with complete or partial vision loss.

Also, Russia's military actions on the territory of Ukraine have prompted us to significantly expand the directions of our work. During the six hellish days of February 2022, Volunteers of the Organization organized the provision of free psychological support services to the D/HH citizens. We also work closely with volunteer organizations in Ukraine and around the world to evacuate people with disabilities from the war zone and provide them with temporary shelter.

In order to reach the audience as much as possible, we have created a column "We know that you do not sleep", in which D/HH citizens receive daily news about the most significant events that impact them.

Our team is the administrator of more than 11 channels, publishes materials in 15 closed Deaf/Hard of Hearing communities in order to spread information about the Russian military aggression against Ukraine to the Russian audience, answers many questions from D/HH people on social networks around the clock.

We ask you for financial support for the PUBLIC MOVEMENT “SOCIAL UNITY” in its activities aimed at protecting people with disabilities in the face of military aggression by the Russian Federation.

(Be sure to include a charitable contribution in the payment).