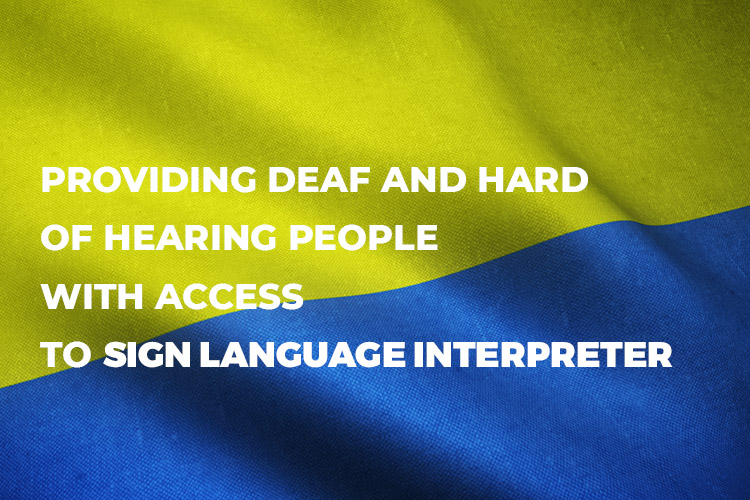 In 2021, the PUBLIC MOVEMENT, “SOCIAL UNITY” implemented a program with the support of the Ukrainian authorities, as a result of which the organization paid for the use of mobile applications by Deaf and Hard of Hearing (D/HH) citizens. During the implementation of the program, there was a demand for the use of this program by over 3,000 D/HH people.
The only licensed mobile application that exists on the Ukrainian market is “Translator JM” (Sign language translator) for the Deaf and the Hard of Hearing citizens to use sign language interpreters to communicate with the hearing world.

Russia's military aggression against Ukraine has been a difficult situation for each of Ukraine D/HH citizens. However, D/HH people are especially vulnerable in this situation. Even before the aggression began, in our previous peaceful life, D/HH citizens were in an information vacuum due to the peculiarities of the perception of information and the low degree of adaptation of public space to their needs. Even though that in Ukraine are exploding Russian’s bombs now, D/HH civilians can mostly feel danger only by their heart. The constant danger to the lives of civilians, the threat of air and missile attacks on civilian objects, fear combined with the lack of information - all this further deepens their sense of panic and doom.

Nowadays, D/HH citizens who use sign language more than ever need unrestricted access to a sign language interpreter. At the same time, a large number of D/hh citizens do not have the financial ability to pay for the use of the sign language Interpreter through the mobile application. The usual cost of one month of using the interpreter services for one user is 600,00 UAH (equivalent to $20.00 US dollars). Due to the hostilities in Ukraine, the interpreter service provider agreed to a reduced price of 400,00 UAH. (equivalent to $13.50 US dollars) per connection. Considering the number of active subscribers among Deaf people, there is increased demand during this time, for communication access to the interpreting service mobile app for over 4,500 Deaf and Hard of Hearing people.

We humbly ask you for financial support for the PUBLIC MOVEMENT “SOCIAL UNITY” in its activities aimed at protecting Ukrainian citizens with disabilities in the face of military aggression by the Russian Federation.

We will be grateful for any help!

(Be sure to include a charitable contribution in the payment).